The Gulf and Caribbean Fisheries Institute (GCFI) was founded in 1947 to promote the exchange of current information on the use and management of marine resources in the Gulf and Caribbean region. From its beginning, GCFI has endeavored to involve scientific, governmental, and commercial sectors to provide a broad perspective on relevant issues, and to encourage dialogue among groups that often operate in relative isolation from one another. For 37 years, GCFI operated as an informal association under the sponsorship of the University of Miami. In 1985, with encouragement from the University, GCFI became an independent not-for profit corporation formally dedicated to its original purposes. 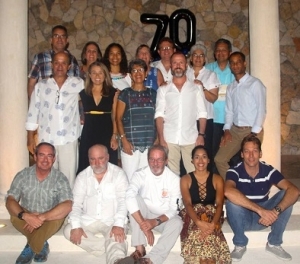 GCFI is governed by a Board of Directors elected by and from its membership and operates under rules defined by the By Laws. Because its program includes the entire Gulf of Mexico and Caribbean region, particular effort is made to ensure balanced representation from throughout the region in its annual programming and decision-making processes. The primary activity of GCFI is its annual meeting devoted to technical presentations and workshops on current issues relevant to the use and management of marine resources in the Gulf and Caribbean region. These activities are documented in the annual Proceedings of the Gulf and Caribbean Fisheries Institute which is received in more than 80 countries. Annual meetings are hosted by government, academic, or private sector sponsors in countries throughout the region. GCFI is entirely supported by member contributions, grants, and subscriptions to its Proceedings. More recently GCFI has been engaged in a number of capacity-building programs. GCFI focuses its activities based on the priorities defined in it’s 5-year strategic plan.

For more information about the Gulf and Caribbean Fisheries Institute, contact: